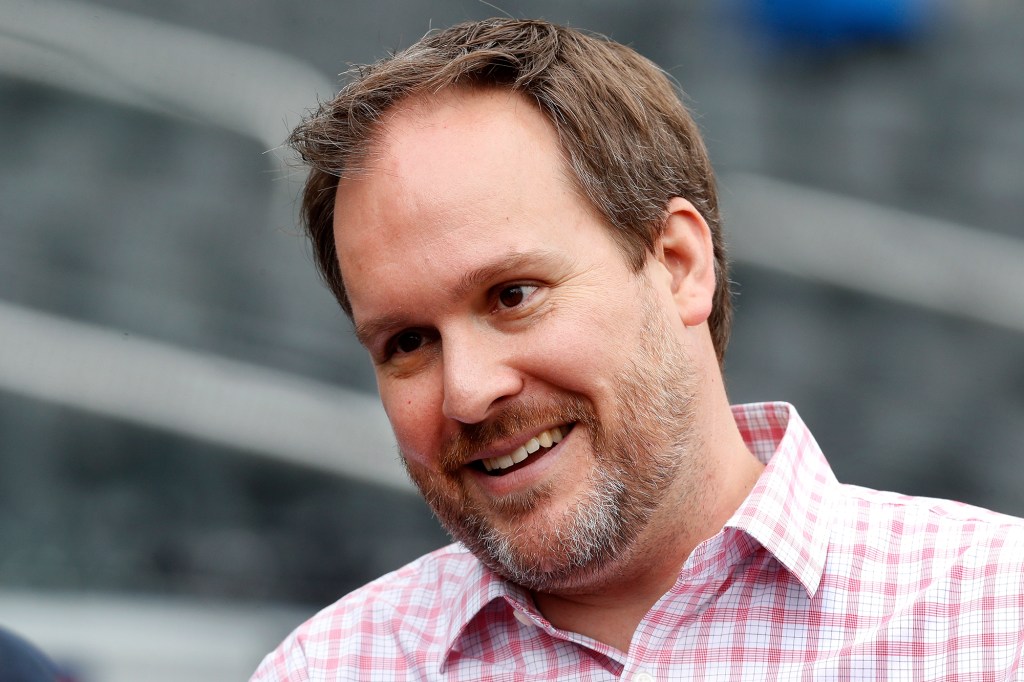 It’s another thumbs-down for the Mets.

Acting general manager Zack Scott is facing charges of driving while intoxicated after he was busted dozing in his car in Westchester County — down the block from the White Plains police station, The Post has learned.

Scott, 44, was nabbed at 4:17 a.m. Tuesday when cops caught him snoozing in a 2018 Toyota on South Lexington Avenue, near the federal courthouse and police headquarters, the city’s Police Capt. James Spencer said Wednesday.

The embattled Scott refused to give blood or submit to a breathalyzer test, but underwent a field sobriety test and failed, Spencer said.

In addition to the drunk driving charge, Scott was cited for stopping on a highway, disobeying a traffic control device and failing to notify the Department of Motor Vehicles of a change in address, police records show.

He was released and is due back in White Plains City Court on Thursday.

On Wednesday, the Mets said they were grounding Scott.

“We were surprised and deeply disappointed to learn this morning about an alleged DUI involving Zack Scott,” the team said in a statement.

“We take this matter very seriously. Zack will not be traveling with the team for our upcoming road trip while we learn more and determine next steps.”

Hours before he was busted, Scott was at Mets owner Steve Cohen’s home for a team fundraiser with players and team officials, sources told The Post.

Mets manager Luis Rojas said on WFAN radio Wednesday that he was also at the charity event, as were about a half-dozen players.

He said “nothing crazy” happened at the event, and he and the players took a bus home from Cohen’s Connecticut home.

He said Scott wasn’t on board.

He said Scott “was driving separately, but I don’t know much past being in the event and having a good time.”

The Mets (65-67) will face the Marlins on Thursday night at Citi Field after Wednesday night’s game was postponed due to rain. They will hit the road Friday to play the Nationals after a stretch of home games.

Scott’s arrest is the latest hit for the Mets, who have been struggling on the field and reeling from a series of controversies off the diamond in recent months.

“It’s hard to understand how professional hitters can be this unproductive,” Cohen tweeted last month. “The best teams have a more disciplined approach.”

The Mets, who hit a rough patch in mid-August losing 12 out of 14 games, have run afoul of their own fans after several players began flashing a “thumbs-down” salute in recent days at Citi Field.

The backlash from the tasteless gesture forced some players to apologize after team president Sandy Alderson called it “unacceptable and will not be tolerated.”

“Mets fans are understandably frustrated over the team’s recent performance,” Alderson said in a statement.

Among the offending players were Javier Baez and infielder Francisco Lindor, who is having the worst season of his career after getting a 10-year, $341 million contract extension from the Mets this spring.

The Mets seemingly have been cursed since Cohen bought a majority ownership interest last year.

His first choice for general manager, Jared Porter, was quickly bounced after reports surfaced that he had sent a female reporter lewd text messages.

In yet another black eye, former Mets manager Mickey Callaway was suspended by Major League Baseball in May through the 2022 season over claims he sexually harassed female reporters, including when he worked for the Mets.

Scott worked 17 seasons with the Red Sox prior to joining the Mets.