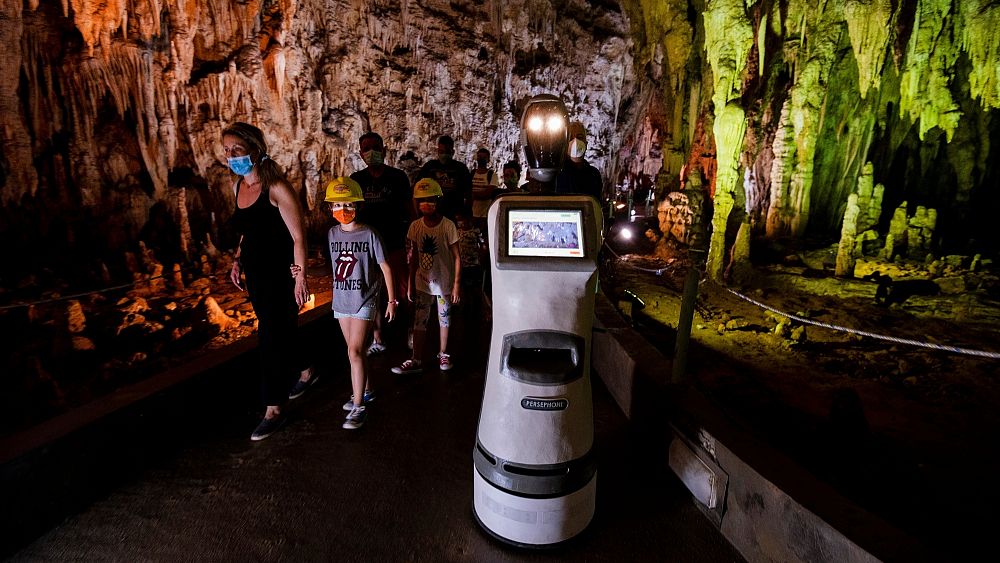 Alistrati Cave in Greece has a new addition to its team of tour guides – but this one is a bit different. Persephone, a robot guide, has just joined her human counterparts showing visitors around this impressive complex of limestone caves.

Named after the daughter of the Greek god Zeus, she speaks 33 languages and guides visitors through the first section of the cave on an accessible walkway.

Nikolaos Kartalis, the Scientific Director of the Alistrati site, had the idea of creating the robot when he saw a similar one on TV guiding visitors around a gallery.

“It can guide in three different languages at the same time and is capable of answering visitors’ questions,” he explains.

How does the robot work?

The robot was built by the National Technology and Research Foundation, 17 years after Kartalis first came up with the idea. It cost the scientific director a total of 118,000 euros to add this new member to his team.

The multilingual machine uses artificial intelligence to guide visitors through the first 150 metres of the cave before handing them over to a human for the remaining 750 metres.

Although she can speak to visitors in 33 languages, for now Persephone’s ability to answer questions is limited to a selection of 33 pre-programmed questions and responses in Greek.

Evdokia Karafera, one of the tour guides partnered with the robot, says she isn’t too worried about her job just yet.

“[Most of the visitors say] The robot is an interesting prototype, but it can’t replace the human contact that they have with the human guide.”

What is the Alistrati cave?

In case you’re wondering why a robot tour guide would be named after a Greek goddess then here’s the connection. In the Greek legend, Persephone was picking flowers in a field, which some believe was near the Alistrati cave, when Pluto (also known as Hades), God of the Underworld opened the ground and kidnapped her to become his wife.

According to Nikolaos Kartalis, the Alistrati cave was officially discovered in 1974 by a team of Greek and Austrian cave specialists. It first opened to visitors in 1998.

The cave site, located 135 kilometres (84 miles) northeast of Thessaloniki, is renowned for its extraordinary array of stalactites and stalagmites.

“The cave is one of the most beautiful caves, not only in Greece but in the whole of Europe,” says Kartalis.

Amongst it’s colourful array of rock formations, the cave is famous for its heccendrites, a rare type of stalactite which grows in every direction and not just downwards. These can be seen throughout the first kilometre-long section of the walkway which is designed to be accessible to people with limited mobility.

Watch the video above to see Persephone in action.