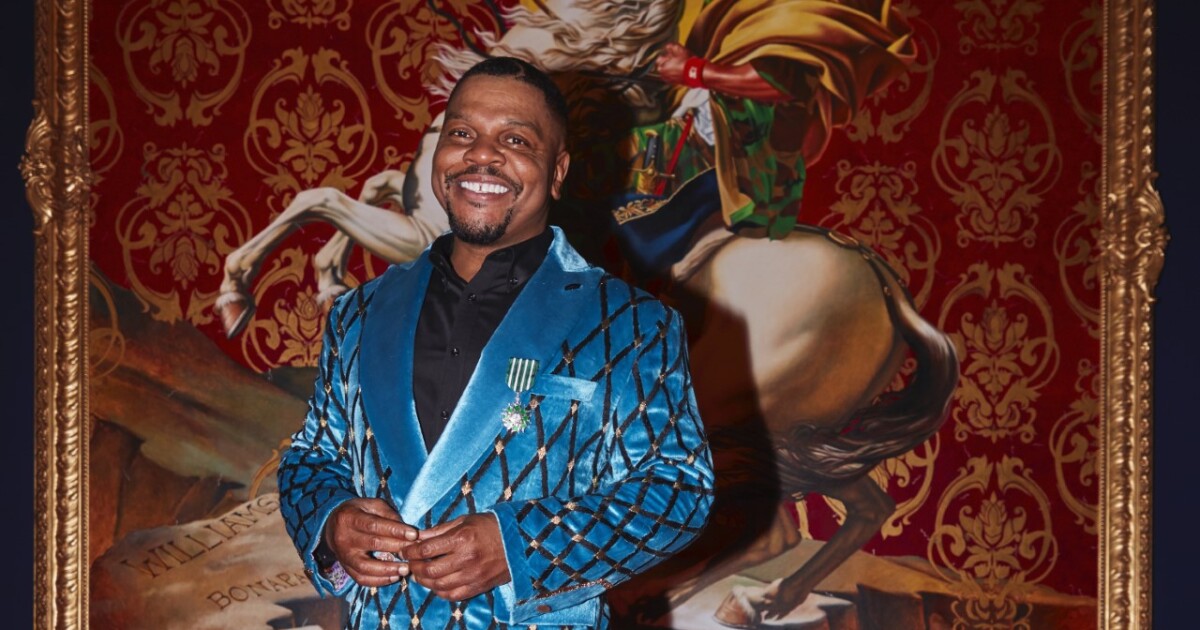 When the $100-million Destination Crenshaw opens as L.A.’s new art corridor in fall 2022, it will feature a towering sculpture by Kehinde Wiley — the latest work in the artist’s “Rumors of War” series, a response to Confederate statues still standing despite the national reckoning on race.

Just as Wiley’s bronze figure of a Black man heroically posed atop a horse rises outside the Virginia Museum of Fine Arts, the new piece for Los Angeles will feature a Black woman on horseback, riding off into battle. Both works address race, power and historical inequities in cultural monuments, but the L.A. work broadens the lens, the artist said in an interview.

“I wanted to expand this question of a struggle for representation,” Wiley said, “and struggle for human rights and for visible signs of dignity, which is essentially what sculptural monuments are — what we as a collective society stand behind, what we gather around and consider to be our high watermarks as a society.”

The project, in the works since 2017, involves hundreds of local residents and business owners as well as museum leaders, academics, activists and community planners. Among those who have been involved: Naima J. Keith, Los Angeles County Museum of Art vice president of education and public programs; Darnell Hunt, UCLA dean of social sciences; activist and artist Ron Finley; as well as L.A. rapper Nipsey Hussle.

Wiley’s statue will stand in the new Sankofa Park. Destination Crenshaw will include nine other pocket parks adding up to four acres of green space with more than 800 new trees, a community amphitheater and more than 50 murals. Organizers plan to revamp the historic Crenshaw Wall mural, “Our Mighty Contribution,” which depicts African American icons. More than 100 artists will be commissioned through 2027 to create works along the boulevard, the heart of Black Los Angeles.

“We haven’t found a contemporary Black arts project, in an urban environment in a public setting, of this magnitude,” Destination Crenshaw President Jason W. Foster said in an interview. “We’re excited about having that happen in the Crenshaw community.”

Foster called the project “a reparative development project that addresses the disinvestment that the Crenshaw community has had over the years.” It aims, he said, “to bring equity to Black Los Angeles.”

All of the artists have a significant cultural connection to the local Black community, said senior art and exhibition advisor Dr. Joy Simmons. Their works will be positioned along the boulevard according to themes: improvisation, firsts, dreams and togetherness. The inaugural seven works will be presented to the Los Angeles Cultural Affairs Commission for approval Oct. 13 — and until then, organizers and artists are keeping many project details under wraps.

Saar described her work as a monument “as opposed to a memorial of the culture.”

She’s creating two 12-foot-tall forms, male and female, dressed in 1950s and early 1960s clothing. The figures will have elaborate hairdos filled with objects that reflect the history of the area — “all of those things that I felt Leimert and Crenshaw were to so many Black families that didn’t really have anywhere else to go,” Saar said.

Saar recalled memories of Crenshaw as the place where her mother, the artist Betye Saar, would shop.

“It was a place where she felt comfortable as a woman of color, and it felt like a community for her that wasn’t necessarily available in other parts of Los Angeles in the early ‘50s.”

Youngblood is creating a brass text sculpture, nearly 7 feet tall. It’s not unlike her 2017 “M.I.A.” sculpture, which is part of a series exploring language and identity.

Lane is making a 12-foot-tall bronze sculpture of a man with his head turned up to the sky. She sees her work as “a symbol of hope and leadership” for the community.

Like so many ambitious neighborhood projects, Destination Crenshaw has faced questions about gentrification. The outdoor works of art, added green space and public gathering spaces are expected to make the neighborhood more desirable, possibly driving up rents and displacing locals.

But Destination Crenshaw, organizers argue, is centered on public art, which is free and accessible to all. And rather than displace Black culture, it aims to make it a permanent, visible part of the neighborhood’s fabric. The project is creating commissions for local Black artists and aims to hire at least 70% of its employees from the community. The architecture firm Perkins+Will is leading the design and construction. The project is using art and culture not only to elevate the community but to promote empathy and understanding and to celebrate the legacy of Black contributions in the city and throughout the U.S.

“It’s about permanence. We create solutions to deal with cultural erasure,” Foster said.

“The debate now,” he added, “is around, ‘Why can’t we live in a beautiful environment? Why does positive investment mean we have to go?’ We’re working to change that. That’s why we have so many components that address tangible benefits local residents can have from this project.”

Foster said that Destination Crenshaw’s mission expanded and deepened during the pandemic. During that time, the project focused on small businesses, helping them secure grants and loans to ensure they were stable — and it aims to keep doing so.

City Councilmember Marqueece Harris-Dawson was a driving force behind Destination Crenshaw, which was a direct response, he said, to the construction of the Crenshaw/LAX line, an 8.5-mile light rail route that will run through the area. The fact that it meant tearing up trees and taking up about 300 business parking spaces upset residents. Just as maddening: The stretch from 48th to 60th streets will run at street-level — as opposed to the safer but more expensive designs of running underground or elevated above traffic, as is the case with the below-ground Purple Line through Mid-Wilshire or the elevated Gold line through Chinatown.

“It’s one of the more insulting things that has happened that will leave a permanent mark on the community,” Harris-Dawson said in an interview. “People will look at that train and remember it.”

Ultimately, Harris-Dawson said, the Crenshaw/LAX line became an opportunity to bring more attention to the neighborhood and its art.

The project has raised $52 million of its $100 million fundraising goal, not counting $6.5 million approved from the state.

The seven inaugural works are scheduled to be installed by fall 2022, at which point the first phase of Destination Crenshaw should be complete. Additional works will be installed along the boulevard over the subsequent five years.

Edwards’ proposed piece will be a 30-foot-tall, chain-link form that crawls into the sky, symbolizing the struggle upward and toward a hopeful future.

Dickson’s 20-foot-tall chrome and fiberglass sculpture celebrates the legacy of car culture in the area.

Hassinger is making a 6-foot-diameter, magenta, Corian stone orb that speaks to curiosity and love.

Wiley, born and raised near Jefferson and Crenshaw boulevards, said his work for the project “is essentially a homecoming.”

“I think it’s really important that I spent so much of my time working all over the world and having the work be seen and appreciated by publics near and far,” he said, “but it’s particularly poignant to have it in my own home community.”

But make no mistake, organizers say: The works of art, and the wider Destination Crenshaw project, are not about creating a sense of place. They’re about showcasing a place that’s already there — its history and future.

Which is why the design of the Sankofa Park platform, on which organizers envision performances and festivals will take place, is inspired by the Sankofa bird, an animal that can turn its neck 180 degrees.

“It can look backwards and forwards,” Harris-Dawson said. “This project is about place keeping and place recognition. It’s also declaring and asserting a future.”