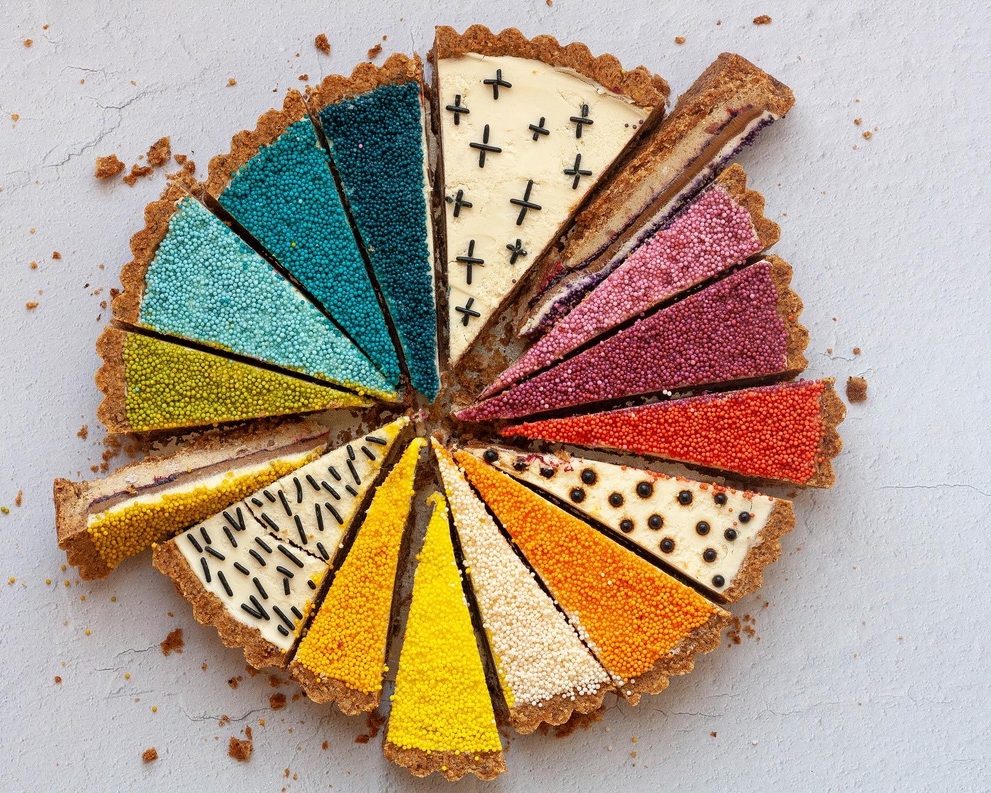 In the first episode of Netflix’s new series “Bake Squad,” Denver-based pastry chef Gonzo Jimenez sculpts a giant chocolate egg with an edible dragon hidden inside. Its sharp claws reach out from a hole in the surface, its beady eyes stare lifelike from within the shell, waiting to be cracked open and devoured.

Filming for the series took place during the pandemic, a time when “the world needed something that was a little pick-me-up when it came to food and shows overall,” Jimenez said.

“I think it clicked after the pandemic (started),” he added. “People want to indulge, and there’s nothing wrong with treating yourself.”

The idea behind “Bake Squad,” according to Jimenez, is to combine the various talents of pastry chefs who appear like a team of “action heroes,” all responding to clients’ baking challenges with different dessert solutions.

More than a competition, the show is meant to provide inspiration, a “la-la-land” version of real-life, Jimenez said. But that dragon dessert isn’t far off from his and other Colorado chefs’ actual day-to-day creations.

Look around Denver, and the pastry world is igniting with playful takes, wild ingredients and beautiful art forms.

While these four chefs aren’t alone in their exciting work, each brings something new and different to the table. Here is a closer look at our own 2021 Denver Bake Squad.

Jimenez indulges his customers with chocolate forms that combine passions for science, design and the outdoors. There’s also a live-action hero quality about his work.

An ultra-runner in his spare time, Jiminez collects pine needles while on long-distance mountain runs and infuses their oils into chocolate bars. And for the last year or more, Jimenez has been sculpting bears everywhere into his chocolates.

He says the inspiration for this particular obsession came after running the Tahoe 200 (that’s miles) over 73 hours and “hallucinating big time. I was seeing baby bears, cartoon bears, all sorts of bears hiding in the trees, the rocks, everywhere,” Jimenez explained of the mind-altering run.

But the combined discipline and freedom of ultra-running only adds to his creativity. When the Argentinian chef first moved to the U.S. he found an affinity for American junk food and chocolate that would later carry over.

Now he loads up on Oreos and Haagen-Dazs before and after races. He takes “industrial” candies like Snickers and Kit Kat and replicates their flavor profiles at Miette et Chocolat using high-quality South American ingredients. He enjoys the high-low balance of it, not to mention the pure indulgence.

“A couple of years ago, all the pastry chefs were trying to come up with desserts that were healthier,” he said. “But (expletive) that. If you are actually going to eat a dessert, go to town, indulge. It’s supposed to make you happy.”

There was a bit of a misunderstanding when Heeji Kim moved back to Denver after working in New York and applied for a position at top downtown restaurant Tavernetta. You see, she was applying for a dining room manager role, while the restaurant assumed that she wanted to work in the kitchen.

And rightfully so: Kim had just come off of stints baking at some of the best restaurants in the country (and world), like Eleven Madison Park and The Modern. But before she could move to her next big restaurant job in Napa Valley, she got into a car accident that left her questioning her future in kitchen work.

“I took a few months off to recover and get better mentally and physically,” Kim said. By the time she was ready to get back to the job, she decided to pursue another passion in restaurants: wine and service.

She was managing at Tavernetta when restaurants were forced to close to in-person dining during the pandemic, and Kim found herself once again with room to think. This time, however, she turned to bake on her own terms. She teamed up with friend and food truck owner Long Nguyen of Pho King Rapidos and started selling boxes of pastries at weekly popups. The response was emphatic.

Kim’s baking style is a combination of everything she’s learned from the fine dining world — intricacy, attention to detail — and her own Korean heritage. Her signature “dancheong” crepe cake, for example, acts as a twist on a traditional Korean sponge with whipped cream and berries. Kim uses crepe batter interwoven with various fruit-flavored diplomat creams, and she recreates dancheong, a traditional wooden building decoration. To achieve the delicate decorative coloring, she cooks down strawberries, blueberries and kiwis with sugar before folding them into the cream fillings.

“It’s always very exciting to imagine something and then make it and it just comes out the way you want it,” she says earnestly, adding that the fewer ingredients she’s working with, the harder a great dessert is to execute, with nothing to hide behind or manipulate.

“I definitely love simple things with a lot of flavors and a lot of surprises that you don’t see from the exterior.”

“If I can make a French pastry chef roll over in his grave, that makes me super happy,” said Elana Berusch, the force behind Lani Bakes, a Denver-based recipe blog that breaks down the mysteries of baking to help wannabe cooks get over their fears of messing up in the kitchen.

Berusch believes that rules are meant to be broken. One of her more scandalous recipes is a cake that looks suspiciously like cheese buttercream from the outside and then cuts open to reveal a three-layer macaroni noodle filling with creamy cheddar and little lines of green peas as dividers.

She said that concoction made her husband “uncomfortable.”

“Mac and cheese is not supposed to be served in a slice,” Berusch said with a giggle. “But it tasted super creamy … it was a strange experience, cutting a cake and putting it in the microwave, then dousing it with hot sauce. It tasted amazing.”

In another provocation, she baked a cake, adorned it with white wedding-like frosting and then wrote on the top, “Please text me when you get home.” It was a seemingly simple act that received the most response and interaction of all her posts on social media.

“We have this canvas which is super eye-catching, so I was trying to harness that,” Berusch said, explaining that the message is something she’s sent and received countless times as a woman trying to ensure she and others get home safely.

“There’s a lot of catharsis in it for me,” she said of baking and utilizing both her canvas and the public social media platform. “And there’s definitely a selfish component to that.”

Most of what Berusch puts out in the world, though, is challenging the patriarchy in less overt ways.

Her Sprinkle Tarts start with a straightforward French pastry shell, then have edible cookie dough for filling, are topped with a fruit ganache and finished off with “a gazillion” sprinkles to create an “overwhelming, kaleidoscope, ball-pit like experience.”

Basically, she’s having fun with desserts and inviting us all in on it.

And even though Berusch has a food science degree under her belt, she says her “thesis” for the recipe project is “don’t take yourself too seriously” when it comes to baking.

So on the blog she teaches some science and some tips and then just as importantly “how to rework a cake that turns into crumbles.” Like she says, “It’s not brain surgery!”

Eva Pankrutskaya sees a lot of potential in Denver’s baking scene. But it’s not just that; she also sees the potential for a more European-style patisserie culture in Colorado. That means cafes with cakes and coffee for convening at any hour. And at Parfait Co., a house-turned-bakery on West Colfax in Golden, she’s starting to spread the word about the beauty of French dessert tradition.

“Fine patisserie is an experience,” Pankrutskaya said. “It’s not simply about mixing eggs, flour and sugar together. You need to have layers because your brain is craving that contrast between something creamy, something soft and something crunchy. There is a whole culture around it.”

After studying at Johnson & Wales in Denver and interning at Café Luitpold in Munich, she attended courses at the French Pastry School in Chicago and, well, there was no going back from patisserie after that.

Now the chef is perfecting her petit gateaux daily, layering flavors from Valrhona’s dehydrated passionfruit chocolates into whipped ganache to top soft biscuit (French) or cake (English). She’s working on breakfast pastries to add to the lineup of little cakes and larger entremet, or layer cakes.

A recent entrée into the territory of travel cakes (gateaux de voyage) yielded one particularly memorable version with two layers of ultra-soft biscuit, a thick caramel and milk chocolate all around. Somehow, it wasn’t too sweet. “Caramel doesn’t have to be!” Pankrutskaya said.

And until she’s forced to expand her business, the chef is tending to every aspect of it herself, which means personalized client consultations inside her pristine kitchen and display area, stocked fresh each day.

A garden greets you at the entrance, a gazebo offers a single cafe table and chairs, and Pankrutskaya is ready to introduce you to patisserie, in her white apron and geometric bob of red hair. It’s a setting where you could linger for awhile over cakes and coffee and imagine all the sweet creations still to come.

Subscribe to our new food newsletter, Stuffed, to get Denver food and drink news sent straight to your inbox.

4 dessert destinations for you to discover in Denver right now